The NWCSA rifle range consists of an enclosed 20 port range building with roll up doors opening onto an approximately 200 yard range. Shooting benches are located under cover in the lighted building. There is a 7 foot concrete apron outside the roofed part of the structure for prone shooting. The rifle range has a range-safety system which consists of several flashing/rotating amber beacon lights and a warning bell which are activated by shooters on the line or the Range Safety Officer to initiate a “cold range” condition.

Events held at the rifle range include: 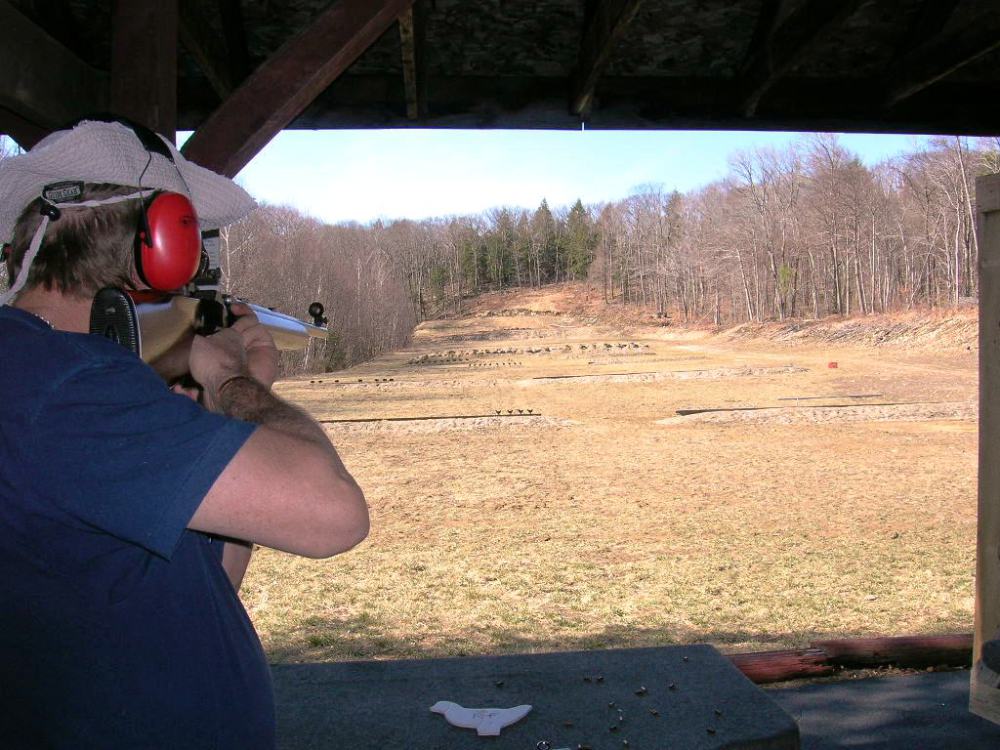 Rifles: .22 Rimfire or min. 6.5mm centerfire, with either iron (open) sights or scopes.

Ammunition: Ammunition (centerfire) must be loaded with cast lead bullets to minimize metal silhouette target damage upon impact. Minimum of 40 rounds of ammunition required. Any .22 rimfire ammunition can be used.

Competition: All shooting is done offhand without slings or shooting jackets. The shooter is given 2-1/2 minutes to engage a bank of five silhouettes (five chickens, pigs, turkeys, or sheep, one shot each, left to right). Scoring is equally simple; if your shot knocks the target completely off it’s stand, it’s a hit. Anything else is a miss. Move on to the next silhouette in the bank. When the shooter has finished the first string of five targets, they are reset and a second string of five targets (of the same animal) is engaged. A match consists of ten gallina (chicken) targets, ten javelina (pig) targets, ten guajalote (turkey) targets, ten borrego (sheep) targets and has a maximum score of 40 points. The object of the competition is to knock over as many targets as you can, using only one shot per target, shooting in the prescribed sequence, within the prescribed time.

Bench rest shooting as the name implies is shot from a bench. All shooting is done from a sitting position. The front of the rifle is supported by a mechanical rest and /or sandbag. The rear of the rifle is supported by a sandbag. The challenge in benchrest shooting is to shoot he smallest size group or highest score. This requires the shooter to develop the optimum load for his rifle and the prevailing weather conditions, pay attention to the details of shooting, and allowing for the proper wind conditions.

Two types of matches are shot: Group matches and Score matches. Group matches are those matches where the scoring is done by measuring the size of a five shot group. Groups are measured center to center of the two shots farthest apart. The winner is determined by who fires the smallest average group. Score matches are fired at five individual targets per match and scored according to number of X’s, 10’s, 9’s etc the shooter scores as determined by the target’s scoring rings. A perfect score for one match would be a 50-5X.

Rifle: Any centerfire production or custom-built rifle with scope sights

Ammunition: Participants must bring appropriate ammunition for their rifle, either factory- or hand-loaded. Cast-bullet match competitors may shoot ONLY cast-lead-bullets (no copper jacketed bullets).

Competition: Shooting will be done on regulation Benchrest targets with one sighter target and 4 scoring targets. Group matches are those matches where the scoring is done by measuring the size of a five-shot group with precision calipers. Groups are measured center to center of the two shots farthest apart. The winner is determined by who fires the smallest average group. Score matches are fired at five individual targets per match and scored according to number of X’s, 10’s, 9’s etc. the shooter scores. A perfect score for one match would be a 50-5X. All shooting is done from a sitting position at a shooting bench. The front of the rifle is supported by a mechanical rest and /or sandbag. The rear of the rifle is supported by a sandbag. A spotting scope is recommended. Participants are responsible to bring or make prior arrangements to borrow the necessary equipment.

This match is pretty much just what it says it is; long range shooting with centerfire rifles at steel plate silhouettes of a Buffalo and a “Quigley Bucket” at 200 yards. The silhouettes are suspended in a heavy metal frame with heavy chains. There is a sensing system attached to the target that detects when the target is hit by a bullet and flashes a strobe light which can be seen back at the firing line.